Great value for the price and memorable experience from start to finish!
Easy to find location, convenient times to book last minute and wonderful way to view the area from the water in a comfortable boat for an hour! Highly recommend this trip to get a great appreciation for the deception pass - today we saw seals, bald eagles, harbor porpoises during a calm, relaxing boat ride. great for all ages and easy access on and off!
Review via TripAdvisor

VIDEO: Baby Dungeness Crabs
A gazillion teeny tiny baby dungeness crabbies at our wash dock. If they survive from this ‘megalopa’ stage, another 4 years before they would be legal size. Not much of a scale to give you actual size, about 1/4 inch. Watch the video here.
via Facebook - 06/22/2018

Success on our whale trip this morning. We were fortunate to spend time with 20 transient orcas.
via Facebook - 06/09/2018

"Great Trip On a Beautiful Day"
Chartered the trip for a memorial / scattering ceremony. The crew were wonderfully accommodating. It was too early in the season for whales but the day turned out beautiful giving everyone a smooth ride. Also learned some interesting historical facts about the various spots.
Review via TripAdvisor

June 2018 Summer Whale Watching
2.5 to 3 hour excursion aboard the Island Whaler to view Orca Whales & other wildlife in the Salish Sea. Click for details.
05/29/2018 - Featured Event

"Come Early and You Will Be Awe-struck!!!"
Skipper Brett and Guide Jared did an awesome job, rivaling the excursions we did last year in Glacier Bay, Juneau & Ketchikan!!! We saw harbor seals, eagles and other wildlife AND amazing vistas of the surrounding archipelago islands - while thoroughly enjoying the company of very friendly & informative crew who treated us like family. We did the hour long jet-boat tour and it absolutely made our day!
Review via TripAdvisor
Jet Boat Tours & Whale Watching
888-909-TOURS (8687)
BOOK A TOUR 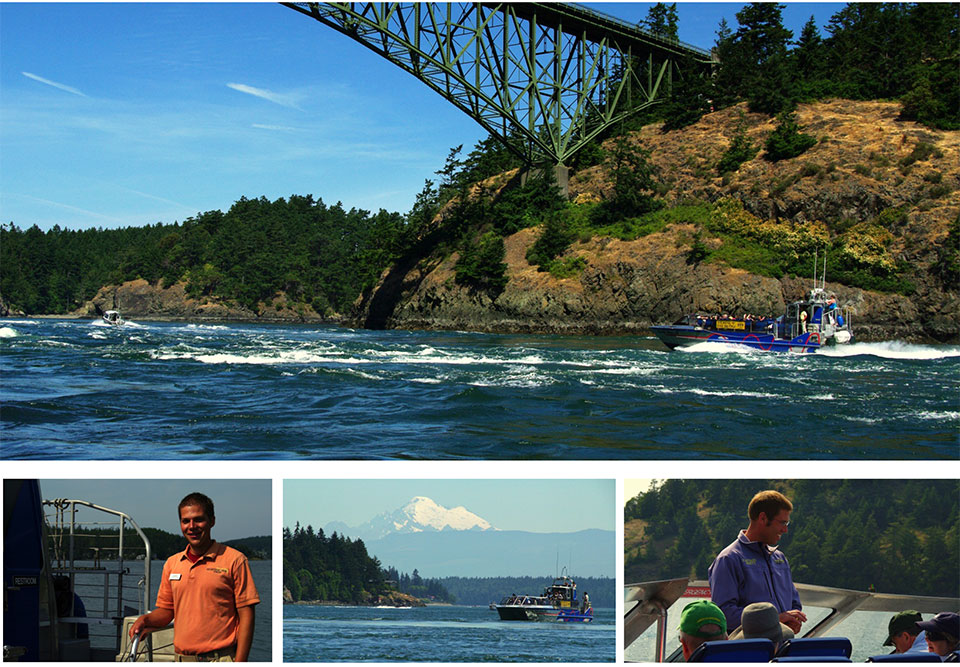 Captain Brett is a U.S. Coast Guard certified captain and would like to share this exciting and picturesque setting with you, while exploring the shores and waters of the surrounding area. Take a unique ride on a seated open deck boat and enjoy a 360° unobstructed view as we pass through the waters of Deception Pass. Also, look for wildlife such as bald eagles, seals, porpoises and maybe an occasional whale. We may not have Nessee or Champ, but we have the world’s largest Pacific Octopus. Learn the tales of characters who navigated these waters and the splendor of this National Historic Landmark.

*Prices, times and vessel subject to change without notice. All tickets are sold based on availability for specific departure time, are non-refundable and may not be exchanged.

From Past to Present

Before this landmark was built, travelers had to cross on an unscheduled ferry. To summon the ferry, passengers would simply hit a mallet against a metal lumberjack saw which sounded the “BOING” to the operator. This indicated they were ready to cross, and the first woman ferry boat captain in Washington would pick them up.

Today, riding through the pass is much easier, tickets can be purchased for Deception Pass Tours at the ticket booth in the parking lot at the south end of the bridge.

Learn more about the ferry and the first female ferry captain on your tour!

Have you ever wondered what it would be like to be smuggled into the US in a burlap bag? In the early 1900’s there were plenty of people who got to have that experience courtesy of Ben Ure. Find out what he did with his cargo when he was outrunning the law on your Deception Pass Tour aboard the Island Whaler.

The prison rock quarry operated from 1910 through 1914, and its nearby barracks housed some 40 prisoners, members of an honors program out of Walla Walla prison.

The prison population was made up of all kinds of prisoners, even murderers. Guards stood at the quarry as the prisoners cut the rock into gravel and loaded onto barges located at the base of the cliff top and the Pass waters. The quarried rock was taken by barge to the Seattle waterfront. The rock was a lot better than the sawdust Seattle was originally built on!

Water Under the Bridge

At peak current at over 8 knots (9.5 mph) almost 900 million gallons of water pour through Deception Pass. That’s 50 times more flow that all the rivers in the Puget Sound. You can see why there is a 4.5 foot height difference in the water level from one side of the pass to the other!

But don’t worry, the boat is equipped with latest safety equipment. Captain Brett and crew will ensure safe passage and an entertaining time for all!

The Boat: The Island Whaler

The Island Whaler is a New Zealand designed jet drive catamaran. The catamaran style and foil assist ensures a soft and stable ride in any conditions. The open deck seating will give you the best 360° viewing opportunity and interaction with the surrounding elements. 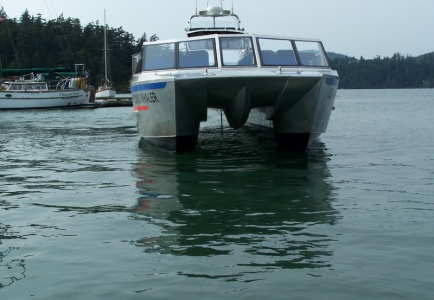 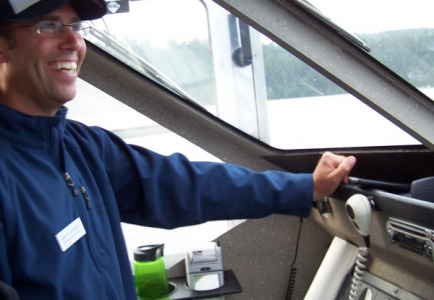 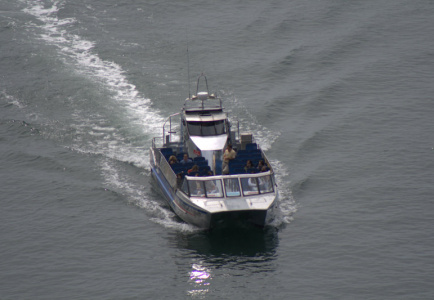 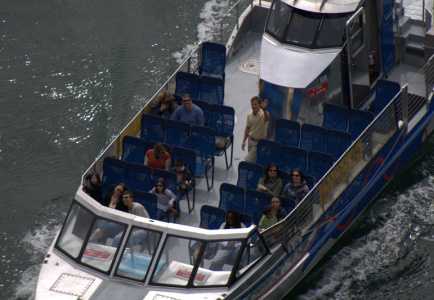 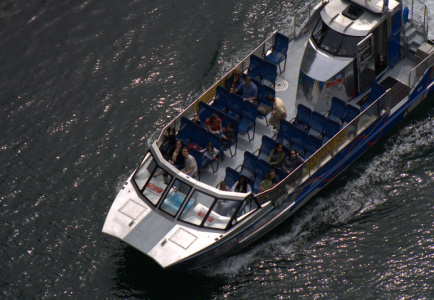 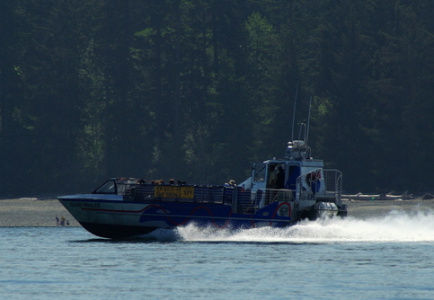 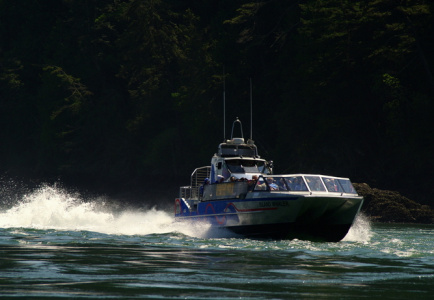 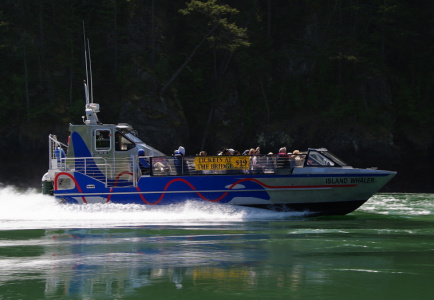 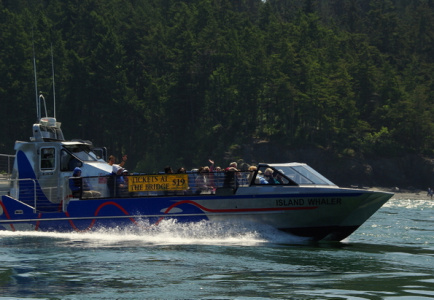 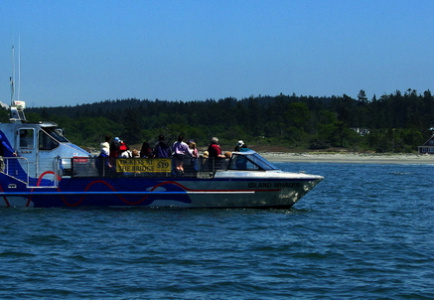 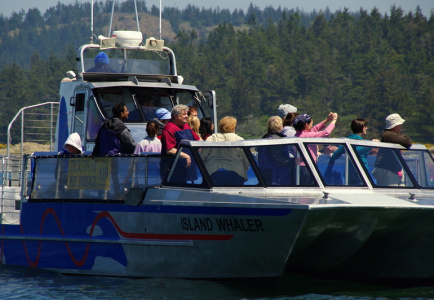 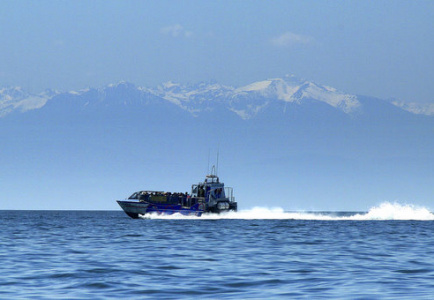 The bridge, one of the scenic wonders of the Pacific Northwest, is actually two spans, one over Canoe Pass to the north, and another over Deception Pass to the south. Construction began in August 1934, and the completed bridge was dedicated at noon on July 31, 1935. The Wallace Bridge and Structural Co. of Seattle, Washington provided 460 tons of steel for the 511-foot Canoe Pass arch and 1130 tons for the 976-foot Deception Pass span. The cost of construction was $482,000.

In September 1982, the bridge was declared a National Historic Landmark. It cost more to paint the spans in 1983 than it did to build them in 1935. They were painted again in 1997. 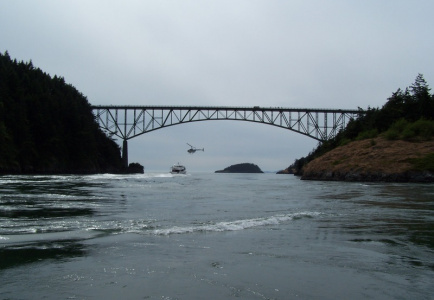 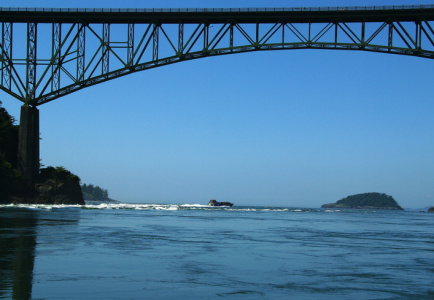 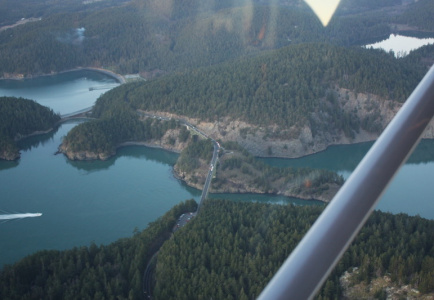 Keep up to date on all the latest happenings, special events, and promotions.

Take a unique ride on a seated open deck boat and enjoy a 360° unobstructed view as we pass through the waters of Deception Pass on a one-hour tour.